Montessori and the Whole Child

Who Is Maria Montessori?

Have you ever seen or participated in a conversation online about Montessori? If so, you’ve likely come across many common Montessori myths:

“A Waldorf school is basically the same as a Montessori school.”

“Montessori is way too structured and rigid!”

Maybe you’ve heard some of these so many times that you’re wondering if they’re true. We want to assure you that they aren’t true! We’ll go over why not as we discuss ten common Montessori myths.

This is probably the most common myth about Montessori schools. Children are not banned from using imaginative play; this seems to be based on the observation that children prefer real activities over their pretend counterpart. For example, a child would much rather actually cut fruit for a snack than play with plastic fruit or even “cut” wooden fruit. Children in a Montessori class have many real activities to choose from, and this is what you’ll find them choosing to do most often.

Art and music also have their place in Montessori classrooms, and children are encouraged to create their own art and learn instruments if they’re interested. One study even showed that Montessori children had higher levels of creativity than children without a Montessori background. 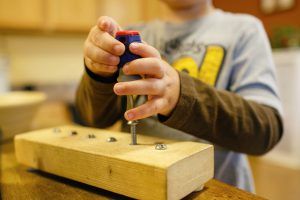 Children prefer to practice with real tools rather than play with their plastic counterparts.

Montessori Myth #2: Montessori is religious and/or affiliated with the Catholic Church.

While Maria Montessori herself was a devout Catholic, her teaching methods are secular and based on scientific observation and evidence; Montessori also wrote of working with children from many faiths, including Hinduism and Islam. Individual schools may be associated with (or even based out of) a particular church, synagogue, etc., but the Montessori Method as a whole is not. We are entirely secular here at the Montessori Center of Downriver.

Montessori Myth #3: Montessori and Waldorf schools are the same.

Sometimes you’ll see a parent asking for recommendations for a great Montessori school, and someone will suggest a Waldorf school instead. There are some similarities between Montessori and Waldorf, but they are not interchangeable by any means.

Both methods respect children as individuals and place an emphasis on educating the whole child. However, Waldorf schools believe in delaying math, writing, and reading education until after a child is seven. The Montessori Method naturally incorporates math and language learning much earlier. Children in Montessori schools are also in multi-age classrooms, while Waldorf schools tend to group child by age. Waldorf places a heavy emphasis on fantasy and imaginative play, whereas, as discussed above, Montessori provides children with many real-world activities.

Montessori Myth #4: Children aren’t supervised and are allowed to do whatever they want.

One of the major tenets of the Montessori Method is that learning is child directed. Children have freedom of movement and choice in the classroom; they are able to choose what and when they want to learn. This doesn’t mean that children do whatever they want. Children are instead gently guided by highly trained teachers, who see themselves more as observers than directors. Children are allowed “freedom within limits,” and teachers ensure that the classroom is peaceful and respectful.

Montessori Myth #5: Classrooms are too structured and rigid.

While some people think that anything goes in a Montessori class, others think that the method is too rigid and structured. Let’s talk about the idea of freedom within limits. There are some limits and structures in place in the classroom: children must be respectful of their peers, their environment, and themselves. Teachers also carefully prepare the classroom environment and choose which materials will be available. That said, children are free within this structure to choose the work that interests them, and they’re given uninterrupted work cycles in which to do this work.

Montessori Myth #6: Group work is discouraged or not allowed. 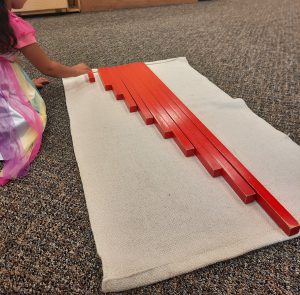 Work is play, and play is work!

Montessori Myth #7: Children won’t receive an academic education or will fall behind.

Sometimes you’ll hear the complaint that all children do is a Montessori school is play. But play is how children learn! Maria Montessori even said, “Play is the work of the child.” Montessori materials were carefully developed to help children learn through play. For example, when a child is working with the red rods, they are learning about quantity (there are 10 rods) and the discrimination of length (the rods are different lengths); they’re also developing concentration, muscular control, coordination, independence, and self-confidence! The concrete knowledge they gain from using these materials will help them move toward more abstract knowledge as they get older. No worksheets needed.

Montessori Myth #8: Children will struggle to transition to a traditional school.

While a traditional school will certainly be different for a child used to the Montessori Method, the experience they had will well prepare them for that change. A Montessori education helps children become independent thinkers with excellent social skills, concentration, and an ingrained love of learning! Studies show that children who received an early Montessori education have advantages over children who did not, excelling in math, reading, social development, and executive function.

Montessori Myth #9: The Montessori Method only works for neurotypical children.

The Montessori Method works for children of all abilities, neurotypical or not, because it celebrates the uniqueness of all humans, and it meets the child where they are. In fact, Maria Montessori originally began her work with children by teaching those with intellectual disabilities. In a Montessori classroom, children are of both mixed ages and mixed abilities, and teachers will adapt to the individual needs of each child.

Montessori Myth #10: All Montessori schools are the same.

This is a big one. Not all schools labelled as “Montessori” are equal. There is no copyright on the name Montessori, nor is there one single governing body to determine whether a school can call itself Montessori. Unfortunately, this means that any school or daycare can call itself a Montessori school without actually doing anything Montessori related! There are ways you can determine whether a school is authentically Montessori, such as ensuring that the teachers are Montessori trained or checking whether the school is registered with any state or federal Montessori societies. The Montessori Center of Downriver is one of only 25 schools in the state to meet the criteria set by the Michigan Montessori Society, and we’d love to answer any further questions you may have about our school or the Montessori Method!